How it all started, how it evolved and why it is not satellites

Let’s start as it is today (2016). My idea about Internet: It is composed of three dimensions which allows us to examine it under three points of view:

See how the communications proceed in detail actually

In Marshall McLuhan’s genial expression, “Global Village” is the perfect metaphor to describe how technology, the age of instant communications and increasing integration among the states will eventually shrink the world to such an extent that commercial, social, and cultural relations, although being on the other side of the earth can be made as easily as if we lived in the same village.

The most obvious dimension and the one has the biggest exposure is the cultural wich enable the coming of existence of the social networks, which as a concept can be explored in many ways, but the one which interest us is the one connected with the Internet, generally referred as social media, such as Facebook and Whatsapp and Linkdln and Youtube today (2016) and I say so, because these things are extremely volatile and if you look carefully, these four examples are completely different in their nature and I will elaborate more on that connecting with the ideas of this paper.

I would mention two examples: Altavista which was initially the Google and Orkut, which featured one of the most important aspect of Facebook: to find old friends.

Rational discussion on the subject through conventional text method is extremely boring and leads to nowhere for practical effects, which is one of the main concerns of the design of this paper as a whole and I mention it to make a point:

Internet is the use you make of it! (as anything else as matter of fact…)

In our case, I decided (and it is not necessarily so) that the most interesting aspect of Internet is the effect on the Map of Knowledge 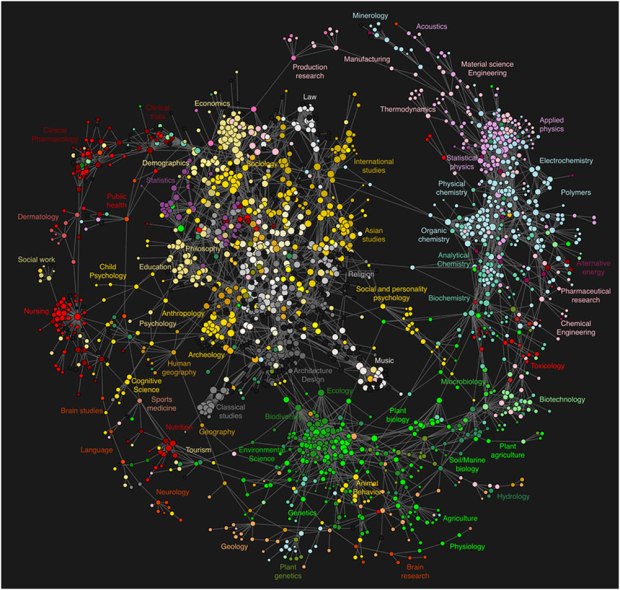 A new map of knowledge has been put together by scientists at the research library of the Los Alamos National Laboratory.It is based on electronic data searches in which users moved from one publication to another, establishing associations between them.

The map includes sciences and humanities, in a hub and wheel arrangement, with the humanities and the sciences in the center arranged around it. The arrangement came up naturally from the data and is not invented, said Johan Bollen, the leader of the research team.

On the map, published in the current edition of “PLoS One”, publications are color coded as follows: physics, light purple, Chemistry, blue, biology, green, medicine, red, social sciences, yellow, humanities, white, mathematics, purple, engineering, pink. Interconnecting lines reflect the probability of a reader clicks of a publication to another on a computer screen.

Similar maps have been constructed based on footnotes in published articles that refer to articles in other magazines. Dr. Bollen believes that his map, click scholars represents the best electronic behavior “that makes the citation analysis, note how the method is called.

One reason is that footnotes are often added to a variety of social reasons, such as to flatter the commentators so one can improve his own citation count or impress colleagues with a range of reading. Clicks represent real scholars use information. In addition, clicks capture access to an article to use it for practical purposes, instead of just following the quote, Dr. Bollen said.

A reader can click on a publication to another based on many other connections besides citations as a text search or an e-mail message, Dr. Bollen said.
“What we have is a map of the world scientific activity,” said Dr. Bollen. He wants to make its data publicly available to scholars to evaluate the impact of their or other items and the degree of influence of scientific journals.

Think carefully in what is discussed above and decide whether if you want to be a tattooed youtuber orienting millions of other tattooed facebook followers whether they should “like” or “dislike” the latest ephemeral, transient, fleeting, frail, perishing trend (or meal, or picture) or if you want to leave your mark somewhere in the map of knowledge, where it really counts to have something .